Spider webs and other things they do with silk

Everyone knows the iconic image of an orb weaver spiders web. Like this one from a golden silk orb weaver.

But not all spiders spin webs like that. For example, here is a jumping spider I found this morning. It doesn’t use a web at all except for nesting. It just jumps it’s prey and bites. On the right is a Green Lynx spider. It spins an anchor line when it jumps it’s prey but it doesn’t spin a web. It’s green color makes it hard to see in foliage but, this one decided to catch a few rays.

Another use for silk is to create a nest. Here is a leaf bending spider which has tied a couple of leaves together and hidden itself inside. I managed to tease it out for a less obscured shot. 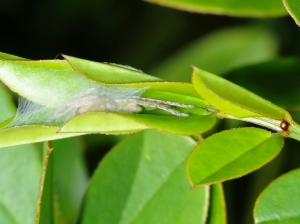 Finally, an orchard spider which has spun a chaotic mess of a web and a really tiny crab spider which attack flying insects.

The first picture here was taken with my old Nikon D50 and 70-200mm VR zoom with a TC-17E II teleconverter. All the others were taken today with the Nikon V1, 30-110mm zoom and a Leitz ELPRO VI closeup lens.

Retired, living in SW Florida and spending my time at nature photography in my local area. I volunteer with a couple of local organizations to help my adopted home town. Travelling is now by airplane and car instead of a sailboat but happy anyway.
View all posts by birds n' bugs →
This entry was posted in animal behavior, Spider and tagged 70--200mm Nikkor, Green Lynx Spider, jumping spider, Leitz ELPRO VI, Nikkor 30-110mm, Nikon, Nikon D50, Nikon V1, spider. Bookmark the permalink.