A walk to the park

This morning, I walked down to Ponce De Leon Park.  I hadn’t been there for a while even though it’s my closest city park.  When I got to the Peace River Wildlife Center I noticed a couple of Great Blue Heron nests.  One of them was on a platform which had been established to attract Ospreys.  The two young in that one were almost full grown and will be leaving soon.  But, there was another one in the tree that overhangs the fence.  Unfortunately, there isn’t much of a way to see the activity there.  The only view is from almost directly below the nest.  From any other angle, all you see is tree.  In the second picture here, I circled what you can see of the nesting heron.  A bit of it’s beak. 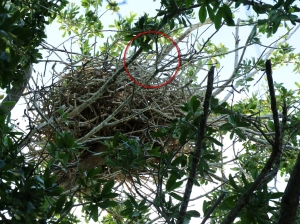 After looking at them for a while, I took to the nature trail.  Not too much happening but after the fishing pier, I looked over the side to see a mangrove crab and a fiddler crab in a threat display.  No fighting, just threatening moves to control their territory.  This is the Mangrove Crab guarding it’s hole.

On the way back, I found a Red Shouldered Hawk sitting on the power lines.  As I approached, it flew off and perched on one of the poles.  This seemed to be a little too close to a Mockingbirds nest for the Mockingbird so, the smaller bird began harassing the hawk.  This consists of flying and pecking at the larger bird.  After a bit, the Hawk gave in and flew away.

So, my little exercise walk turned out to be pretty interesting.  As usual, you can click on the images to see a larger size.