Benefits of the drought

It’s not often you can find a benefit in something like a drought.  For nature photographers it does have some benefit.  As ponds dry up they get smaller and the critters preyed on by our wading birds get concentrated in small locations.  The bigger lakes aren’t drying as much but little flood control retention ponds that the birds have stocked dry up as intended waiting to hold the next storm runoff.

One that I like to visit is the retention pond behind the Kings Highway Walmart.  That parking lot has a lot of water running off when it rains and there are two ponds there.  A deep one is fenced off but there is a large shallow settling area which gets the water first.  Here are a few shots from that location over the last few days.

Anhingas spear their catch and have to flip it around to swallow it.  I caught this one at just the right time.

Roseate Spoonbills use the spoon to stir the bottom  The other wading birds follow them around to catch what gets missed.

This Great Blue Heron has managed to catch a Black Swamp Snake for lunch.  They don’t seem to have any problem with venomous snakes.  Further study shows me that this is a non-venomous Black Swamp Snake rather than a Cottonmouth. 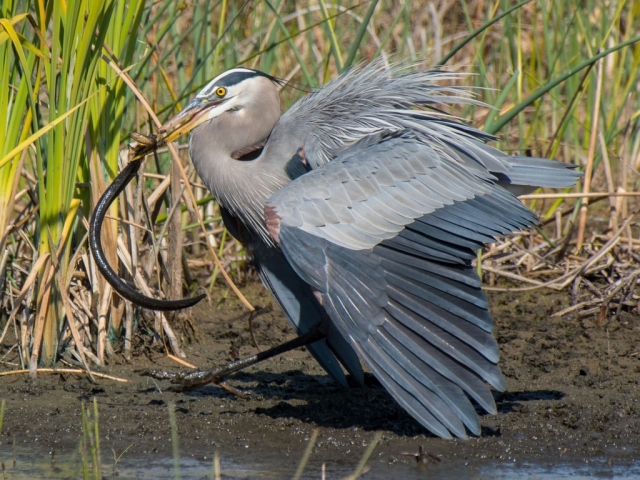 You seldom get four species in one shot.  I could have had a Glossy Ibis in this one but it was a bit too far out of shot.

It took a while to subdue the snake and the Black Swamp Snake was always trying to get away.

A Kingfisher in flight.  I have never gotten what I consider a good shot of these small birds.  They are very shy and skittish.  The reduced size of the pond though kept it fishing near me.

And then, like any good fisherman wanted to show off it’s catch.

Retired, living in SW Florida and spending my time at nature photography in my local area. I volunteer with a couple of local organizations to help my adopted home town. Travelling is now by airplane and car instead of a sailboat but happy anyway.
View all posts by birds n' bugs →
This entry was posted in animal behavior, Bird, reptile and tagged anhinga, Balck Swamp Snake, feeding, Great Blue Heron, kingfisher, Little Blue Heron, Roseate Spoonbill. Bookmark the permalink.

2 Responses to Benefits of the drought