Not a good day for an Airshow

This weekend is the Florida International Airshow at the Punta Gorda Airport (KPGD).  Unfortunately, the weather hasn’t been very cooperative.  I did get a few shots of the T6 team flying around on Thursday.  On Friday, I went over to the industrial area at the end of the runway to see what I could get.  It was a pretty grey day but I stuck around anyway and managed a few shots.  It’s tough to get anything really good on a dull day.  I was fortunate that I took the time though.  Saturday has been a fairly steady rain and I doubt that a lot of flying was going on.  Still, the show is on tomorrow so I might get a chance to go.

Here are a few shots from the last couple of days.

The T-6 flyers had a variety of livery from all branches of the service that had used this aircraft as a trainer.  The yellow one at the top here is actually a T-16 which is what the Canadians called it when it was built under license.

Another trainer flight team is Lima Lima and they fly their formations in the T34 Mentor.

The theme of the airshow was a salute to veterans.  I didn’t see the usual flyby of a modern jet fighter with the old warbirds but, they did have an all warbird formation. 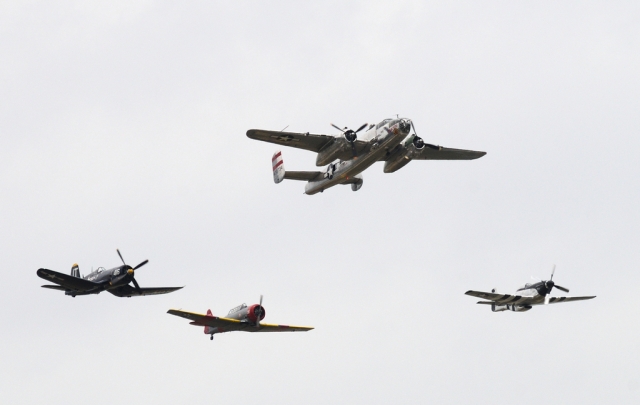 The B25 ‘Panchito’ led the flight with an F7U Corsair and P51 Mustang on the wing and a Douglas SBD in the slot.

We also Had the B17 ‘Texas Raider’ at the show offering flights.  I managed to get one as it took off just before the show.

And, of course, we had the stars of the show, the USAF Thunderbirds.

I’ll probably head to the show tomorrow if the weather holds off to see the static displays and shoot from the flightline.

Retired, living in SW Florida and spending my time at nature photography in my local area. I volunteer with a couple of local organizations to help my adopted home town. Travelling is now by airplane and car instead of a sailboat but happy anyway.
View all posts by birds n' bugs →
This entry was posted in Airshow, Event and tagged B17, B25, Corsair, F7U, flight team, Florida International Airshow, Lima Lima, Mentor, Mustang, P51, SBD, T16, T34, T6, Thunderbirds, USAF. Bookmark the permalink.

1 Response to Not a good day for an Airshow