These flies are very, very common all over the world. There are about 7000 different species so, I have no idea which these particular flies are from. I do know that I see them often but they are difficult to photograph. They are only about 2-3mm in length and they are very, very quick. If it’s relatively cool they are less active but most of the time they don’t sit still long enough to get their picture taken. Yesterday evening, I was out walking around the yard with the Nikon V1 and Leitz ELPRO VIa. I discovered that with the flash and short working distance it was difficult to get them standing still. I did get some unusual in flight shots though. 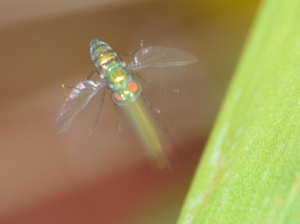 In the one on the left, the flash has made for some dazzling diffraction on the wings and the one on the right shows motion blur from ambient light. It also shows that the fly leaps into the air backwards. Here are a few others that show them stationary. Most of these were taken with a D300 and 105mm Micro-Nikkor which allows for be to shoot from further away and less likely to frighten them off. 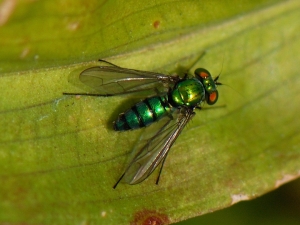 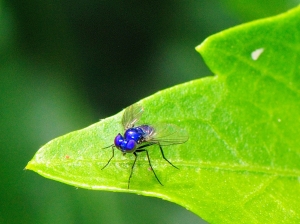 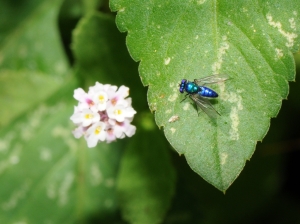 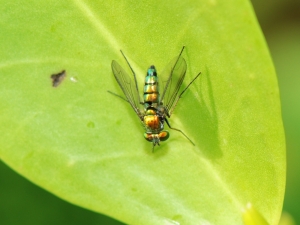 Retired, living in SW Florida and spending my time at nature photography in my local area. I volunteer with a couple of local organizations to help my adopted home town. Travelling is now by airplane and car instead of a sailboat but happy anyway.
View all posts by birds n' bugs →
This entry was posted in Bug and tagged Dolichopodidae, Leitz ELPRO VI, Long-legged fly, Micro-Nikkor 105mm f2.8 VR, Nikon D300, Nikon V1. Bookmark the permalink.