While the Eastern Brown Pelican is still considered threatened in some states, it is doing just fine in Florida.  I see them everywhere around Charlotte Harbor although favorite places are Ponce de Leon Park, Placida, Fisherman’s Village and just about anywhere there is a piling to sit on.

This guy on the left seems a bit of a scofflaw and with the downcast head and crossed toes seems a little ashamed of himself.

The one on the right is all dressed up in mating plumage looking for a date.

These are large birds.  Their non-breeding colors are a more muted brown and grey with pale undersides.  They can weigh about 8 pounds and are about 4 feet long with a wingspan up to 7 feet.

I often see them in flight along the PGI entrance canal.  They have a roosting area that is reachable by shallow draft boat or a long haul through a mangrove marsh. 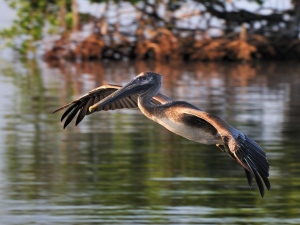 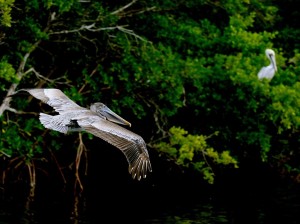 They are a bit of a bully with smaller birds though.  The pilings for the channel markers are used by a lot of birds to rest from feeding.  You quite often see Anhingas, Cormorants, Gulls and Terns on them but, when a Pelican wants one for a roost, there is no argument.

Normally, their flight and landings are more graceful.

They dive to feed and their pouch can hold about 3 gallons of water.  While cartoons show them with quite large fish in the pouch, it’s actually more like a net that can hold a lot of smaller fish.

One interesting to see in flight is their ability to glide for very long distances without moving their wings.  This is done with a high angle of attack on the wing which pushes a cushion of air beneath them.  Man has copied this with an aviation technology known as Wing In Groundeffect or WIG.  Here are a couple of shots of Pelicans In Groundeffect (maybe I could call that PIG) 🙂

Retired, living in SW Florida and spending my time at nature photography in my local area. I volunteer with a couple of local organizations to help my adopted home town. Travelling is now by airplane and car instead of a sailboat but happy anyway.
View all posts by birds n' bugs →
This entry was posted in Bird and tagged Eastern Brown Pelican, Photography. Bookmark the permalink.