Audubon-Pennington Park is a small, 7.9 acre preserve managed by the Peace River Audubon Society.  It has a small parking lot located at 1153 Alton Rd, Port Charlotte, FL. The entrance is via a very narrow passage in a fence and would not be possible in a wheelchair.

Although small, the habitat is diverse and includes canal side, swamp and hammock environments for a great experience in a small place.  The main trail is approximately 3/4 miles long but there are some nice loops and sidepaths that can be followed.

My local camera club scheduled an outing there today with an emphasis on sharing Macro and Close-up work techniques. We arrived early on a cool morning. I was hoping to find owls in some of the live oak trees but didn’t see any. The underbrush is pretty thick in the park but thre are places to get deeper into the woods off the path.  here are a couple of views of the path. 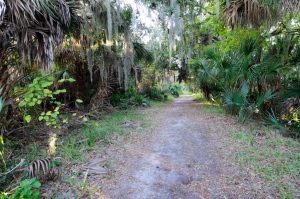 Even in summer, the shade makes this a nice place to walk and enjoy.  There are many large old Oak trees providing shade and a hanger for the Spanish Moss.  Many types of wildflowers can be seen in the undergrowth and along the path attracting many types of pollinating insects.  The Peace River Audubon Society schedules regular work parties to keep the occasional benches in good condition and the paths clear.

We did find one really fun  thing.  One of my friends asked me how I found the tiny spiders I sometimes showed the club.  I told him that tiny spiders spun tiny webs and all you needed to do was find them.  The saltbush seeds were flying everywhere so, it was easy to see where they were sticking in the fine webs.  We found one and were then surprised to see that it was literally filled with a new hatch of tiny spiders no more than 1 to 2 millimeters in size including the legs.  They were so clustered in the web that we found it difficult to isolate one for a picture.We took quite a few shots of them and then turned the target over to others as we walked around.  Later, we came by the same path and I decided to see if they had dispersed to make the shooting easier.  WOW, they were even tighter together than the first time.  It appears that a fly had stumbled into the web and it was party time.  The left shot here was the first sighting of the web and the right was taken on the re-visit.

Later, we found an interesting Larger Florida Mantis – Stagomantis floridensis which was kind enough  to pose for everybody who wanted a picture.  I used the opportunity to show a couple of folks how I used flash for handheld macros. 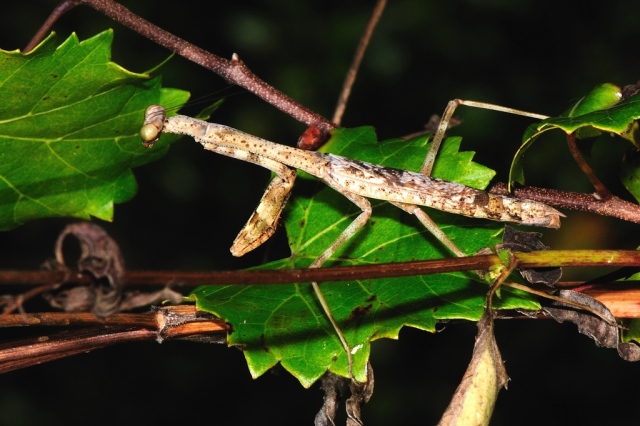 This is also a great park for plants.   If I had any interest in botany, other than knowing host species for some bugs, I could have spent all day just shooting wildflowers and plants.  The diversity in habitat and foliage is incredible for such a small plot.  I don’t usually shoot plants but, here is one of my equipment test shots from this morning.

Yep, everything was working OK and it was a great day in the woods. You can see more shots from Audubon Pennington as one of our club galleries.

Retired, living in SW Florida and spending my time at nature photography in my local area. I volunteer with a couple of local organizations to help my adopted home town. Travelling is now by airplane and car instead of a sailboat but happy anyway.
View all posts by birds n' bugs →
This entry was posted in Bug, Camera Gear, Park, Spider and tagged Photography. Bookmark the permalink.